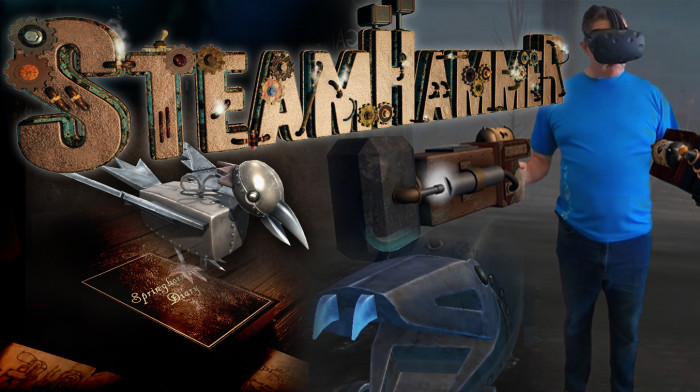 SteamHammerVR takes you to the steampunk world of Victorian London, 1892. The dastardly Professor Rattwurm is attempting to enslave the fine English folk with his army of clockwork rodents. Using this new-fangled steam power and the technical expertise of Doctor Obadiah Springhorn you are armed with the latest gizmo for bashing robot rats – The Steam Hammer exo-suit!

Players can choose Steam Hammer weapons for both hands. Options available include the Steam Hammer, Steam Cannon, Magnet Beam, Rotor Hammer, Rotor Saw, and Tesla Ray. The game features quite the engaging storyline and characters that immerse you in 19th century Steampunk Victorian London. Explore many areas, including the streets, to the sewers, from the Tower of London to the banks of the River Thames while completing your missions.

See More!
GamestormVR has turned to the Kickstarter community to raise money for this game because they want to create one of the most epic VR experiences of 2016. The team wants to involve the gaming community in SteamHammerVR’s development, and they are even giving players the chance to be immortalized in the game! If this crowdfunding campaign goes well, GamestormVR would like to build a version of SteamHammerVR for both PlaystationVR and the Oculus Rift.
“It is a dream becoming reality seeing your ideas on paper brought to life in VR, truly magical,” says ‘Magic’ Martin Rowe, the project’s Artistic Director, “The funding raised will not only be used to enhance and expand the world of SteamHammerVR but will also allow us to attend as many gaming conventions as possible between now and the official launch in December 2016. We want to bring SteamHammerVR to as many people as we can.”
In exchange for pledging to the project, backers can gain access to a variety of rewards including a credit in the end titles for £5, a Founders Edition of the full SteamHammerVR game for £15, and more. Backers can also pledge £25 for an official Limited Edition ‘SteamHammerVR London Tour 1892’ T-Shirt or £100 to have an image of your face expertly placed somewhere in the gameplay and an acting credit.
For more information, please visit the Kickstarter page here.
Since being awarded the Smarta100 in 2010 as one of the most resourceful, inspiring small businesses in the UK, Showstorm has grown to be a uniquely talented team of creative and technical professionals driven by a passion to create, pioneer and deliver first class memorable entertainment experiences.
If you can imagine it then we can very likely create it, but our real forte is in dreaming up and delivering products that nobody has imagined yet.

Already industry leaders in the creation of professional Entertainers Software, in 2016 we are pioneering with our vision for the next evolution of stunning content, specialising in (AR) Augmented Reality and (VR) Virtual Reality technologies.