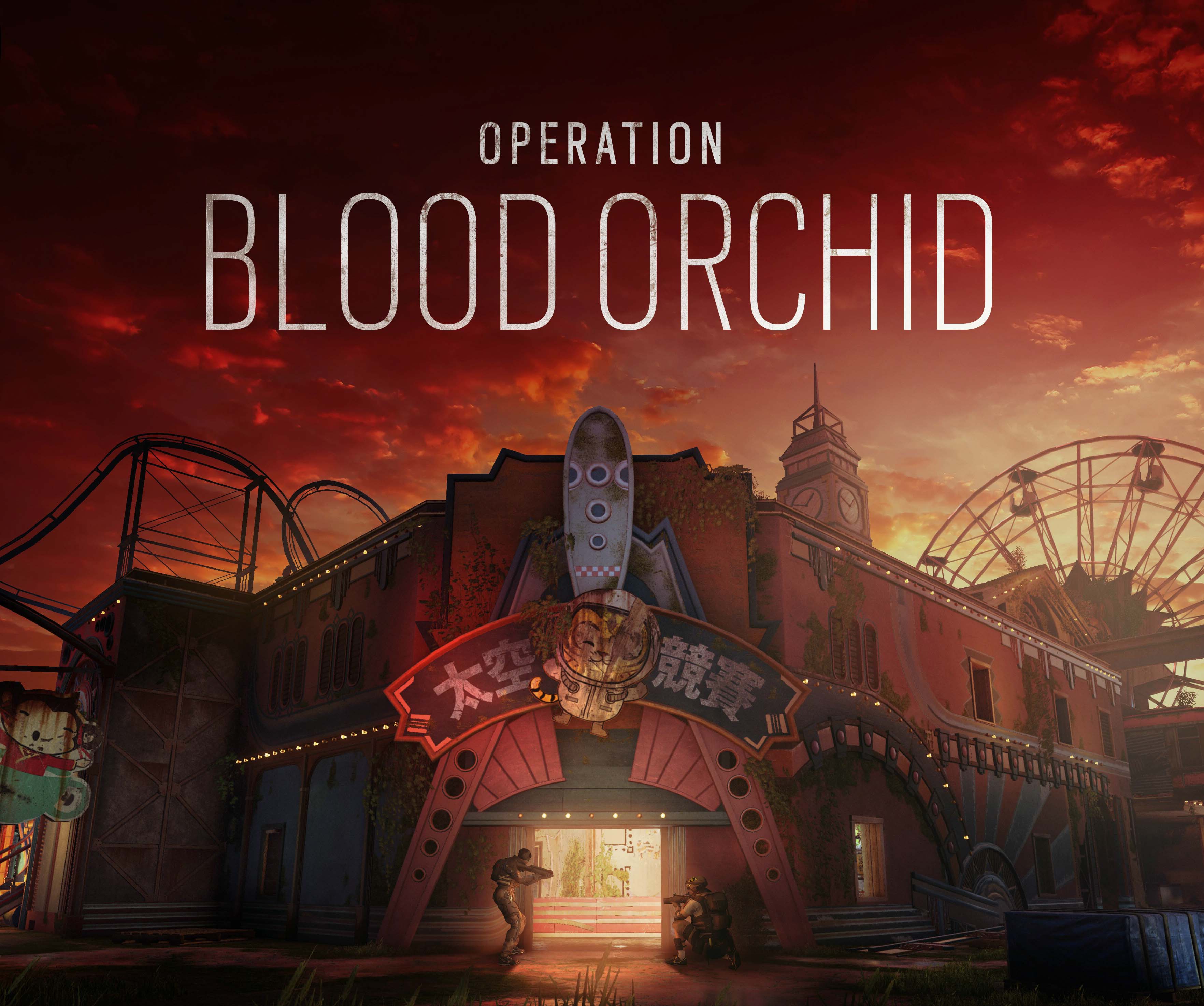 LONDON — SEPTEMBER 4th, 2017 — Ubisoft® has announced that the Operation Blood Orchid Update, the Year 2 Season 3 add-on content for Tom Clancy’s Rainbow Six® Siege, will launch September 5th on Playstation®4 computer entertainment system, Xbox One and Windows PC. The Theme Park map will be available at no additional cost for all players. Starting September 5th, season pass holders will be able to access three new operators and their signature weapons skins. All other players will be able to unlock the new content starting September 12th using Renown or R6 Credits.

Theme Park Map and Two New SDU Operators
In Operation Blood Orchid, players will have to raid an abandoned theme park, identified by the Special Duties Unit (SDU) – also known as the Flying Tigers – as a criminal organisation’s nest for narcotic manufacturing. After establishing a connection with the Hong Kong Triad, two Flying Tigers are chosen to lead a lethal raid in the Theme Park, a colourful and eclectic map filled with dynamic and fast-paced face-offs.

Ying: Siu Mei Lin is recognised as an all-purpose operator. After a few operations, she decided to join Team Rainbow, representing Hong Kong’s Flying Tigers Unit. Equipped with the T-95 LSW and the SIX12 shotgun as primary weapons, she knows how to intervene in densely populated areas with her non-lethal unique gadget. Her Candela device is a new breed of flash grenade: when deployed, it releases a cluster of flash charges that can be anchored on surfaces, or it can be thrown out as a grenade or rolled along the floor.
Lesion: Liu Tze Long is known to take his work seriously and to thrive in high-risk situations. Demonstrating a natural calm while handling highly corrosive substances, he’s also an expert in mine-clearing. Equipped with the SIX12 SD silenced shotgun and the T-5 SMG, Lesion can handle any situation with his Gu mines. When an attacker triggers these mines, they are injected with a toxin that deals an initial burst of damage, and then slower damage over time, limiting their speed until the affected player removes the poison dart. Starting with two Gu mines, his inventory will increase by one Gu mine every 35 seconds until it reaches a maximum of seven mines.

Get ready for the Operation Blood Orchid Update!

New Polish GROM Operator, Ela Bosak
Ela: Ela Bosak is the latest and one of the youngest recruits to Team Rainbow. This thirty-year-old operator is a member of Poland’s Military Unit, GROM, and is equipped with the Scorpion EVO 3 A1 SMG and the F0-12 shotgun as primary weapons. Ela also is equipped with the RG15 pistol with a red dot sight, the first pistol in the game with a sight. She is known for her determination and prowess in the field. Her sticky Grzmot mines are proximity concussion mines that affect anyone within radius with reduced movement speed, aiming and vision. Ela’s signature move when in a downed state is the ability to trigger one last concussion mine.

To mark the culmination of Operation Health, the Blood Orchid Update will be the largest update for Tom Clancy’s Rainbow Six Siege ever deployed, bringing fixes and improvements to the game, including an updated lighting system, data clean-ups on operators, optimized stability, reduced load times and a smaller memory footprint. New and improved servers will also be deployed around the launch of Season 3 to enhance stability, connectivity and overall performance. For more information about this patch, please consult the full patch notes on rainbow6.com/bloodorchid.

About Tom Clancy’s Rainbow Six Siege
Inspired by real-world counter-terrorist organizations, Tom Clancy’s Rainbow Six Siege puts players in the middle of lethal close-quarter confrontations. For the first time in a Rainbow Six game, players will engage in sieges, a new style of assault where enemies have the means to transform their environments into modern strongholds while Rainbow Six teams lead the assault to breach the enemy’s position. Tom Clancy’s Rainbow Six Siege gives players unprecedented control over their ability to fortify their position by reinforcing walls and floors, using barbed wire and deployable shields, laying mines and more, or to breach the enemies’ position using observation drones, setting charges, rappelling and more. The fast pace and uniqueness of each siege sets a new bar for intense firefights, strategic gameplay and competitive gaming.

Get ready for the Operation Blood Orchid Update!

In case you missed this, here is something else to grab your gaming fix!